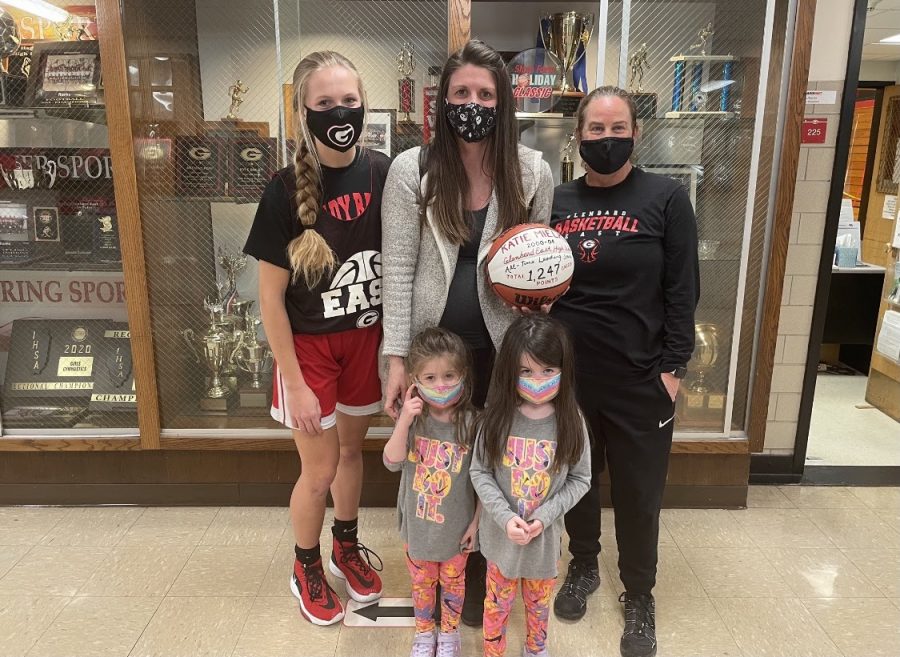 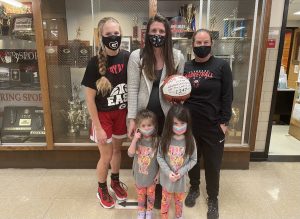 Senior Lauren Huber, varsity point guard for your Glenbard East girls basketball team, made her mark on GBE history this season. Not only did she break 1000 points, but she also is now Glenbard East’s all time point scorer. In a Q&A with Lauren, we hear about her time at East, what these moments have meant to her, and what advice she would give to younger aspiring athletes.

Q: How old were you when you started playing basketball?

A: “I was five years old and I played park district so I could play co-Ed with my cousin Cade. After that I played Upward with [my sister] Mackenzie, and I then played for St. John’s and Junior Rams.”

Q: When you started in the program as a freshman, what did you hope to achieve here at East?

A: “Freshman year I was just trying to make it down the court; I had Osgood Schlotters so my knees were pretty shot, but I still played. Really what I wanted to achieve-since we had such a strong Junior Rams team and a group of athletes who were so committed to playing-was turned around the program. In previous years you could count our wins on one hand and what I wanted to achieve here was keeping our group together and building the program.”

Q: Going into the season, did you envision and believe yourself breaking these records?

A: “Those thoughts of scoring never really came into focus after my junior year. That year the focus was really on winning every game individually and tackling the team game. My junior year we had a program high of most wins and it wasn’t until Awards Night that I realized how close I was to 1,000. I saw a tweet [this January] that said ‘Basketball is over, football is hanging on by a thread,’ so then I didn’t know if it was actually going to happen.”

Q: When you stepped foot out on the court this season and hit your 1000th point, what were your thoughts at that moment?

A: “I think because of COVID and the thought of it all not being able to happen made it that much more impactful and meaningful. Also having it on our own court, as Coach Miller and Coach T did a great job of scheduling us many games and many here at East, it was great being home and having our fans, parents, the support from everyone, the bench, the cheering, really all of it. I couldn’t have asked for a greater group of girls, they are so supportive.”

Q: How have Coach Miller, Coach Toliopulous, and the group of girls on your team impacted you on your journey?

A: “Mr. Bates has been fighting for us to have a season, working for any way to get us [on the court]. Coach Miller and Coach T in the same way scheduling games; it’s just so clear that they are here for us and this isn’t just a job for them, they are really trying to impact our lives. And I think they do such a great job at enabling us with these chances and giving us the opportunity to make the most of the season and what we want it to be.”

Q: What was it like to meet Katie Mielke, the former record holder for all time points scorer here at East?

A: “It was really nice meeting her and being able to put a face with the name that I’ve been looking at for so long. Seeing how 17 years later her life has changed so much; she has two young ones, she’s done with sports, she’s working, but she still thinks about the experience. She said the team and camaraderie is really what has stuck with her throughout everything. When she went into the workforce it was kind of an adjustment. We take for granted how like minded we are on a team, all going for the same goal and we’re all just leaving out there, but not everyone has that same work ethic [off a team]. I’m grateful for the time I’ve gotten to spend with athletes.”

Q: Do you have any advice for the program or younger athletes in general?

A: “I would say we play sports to have fun and keeping that idea of fun is what keeps success coming. Coach Miller does a great job with this-we had our water balloon fight, we go to Portillos, we get tacos. Don’t think about ‘if i would have made that shot we would have won the game’ or ‘if COVID wouldn’t have happened we could’ve had a longer season,’ just be happy with everything. Take it and make the most out of it.”

In a conversation with Coach Miller, she elaborated on the Girls Varsity Basketball Program over the past few years, as well as what it has been like to coach Lauren Huber. Here is what she had to say:

Q: What has your experience been like coaching the present varsity team as well as Lauren Huber in particular?

A: “When this group of girls were all freshman, a few were on the sophomore team with me and the rest were on the freshman level, but you just saw a connection between them. The varsity position opened up and I had no intention of coaching varsity again but this group was so amazing that I didn’t really want anyone else to coach them, so I took it over. They work so hard and that first year we learned a lot as such a young team on varsity. Lauren really dedicated herself to the game–she played AAU meanwhile the whole team is getting better. Everyone kept playing and getting better. We had a fun summer the year before and their connection to each other was something really special, amazing, and fun to be around. Lauren is very talented and she had her eyes set on breaking some records. At some point it must’ve clicked for her where she was like ‘I can really do this.’ Even in the middle of COVID what she had to do in that amount of time was absolutely incredible. This is a tribute to her and her teammates because she doesn’t achieve any of this without the whole group. Amazing support and a good group of athletes. It was fun to see that happen, in this moment.”

A: “The precedent that they [the team] set is that it’s about being a good chemistry, hardworking group, committed to each other. That’s something that when you see them play, whether it’s a great game or a hard game, they are so supportive. For Lauren, it was about how hard she worked to get where she is. The time that she had to put in on her own, the time from last season’s end to the time where we picked it up again, she had to work incredibly hard and begin to master different skills to be able to perform. Going on and playing on an elite AAU team was definitely helpful. Her ceiling is high as far as where she can get to.”