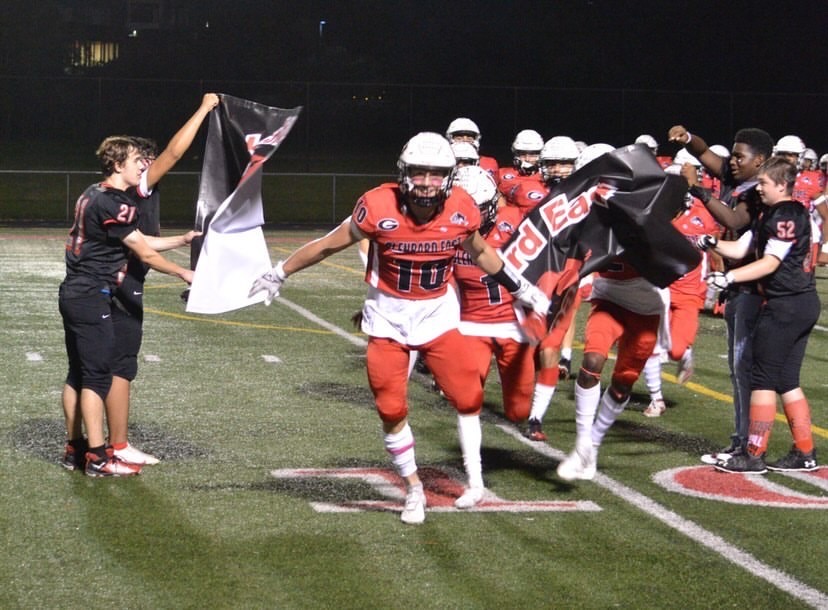 From the opening kickoff, the Rams have had an impressive “hot start” to their season. In the first four games of the season, the Rams outscored their opponents 148-27!

After a disappointing loss to South Elgin, the Rams bounced back and continued to outscore their opponents by a large margin: 69-7. The team’s explosive offense and poised defense have allowed them to dominate. The Rams have an impressive 0.86% winning rate and are currently third in the conference.

A major reason for their success is their defensive team. The Rams’ defense has led to many victories against skillful opponents, in the process catching the attention of the Up-State 8 Conference.

“Our defense as a whole is a strength we have. We have monsters out there and they are difficult to get past,” said wide receiver Tyrese Buffkin.

In seven games, their defense has only allowed 75 points. The defensive squad’s ability to stop opponents from scoring and causing turnovers has given the offensive team more field time and chances of scoring. With the help of their strong defense, the offensive has scored 224 points.

Although the Rams have previously had good starts in the regular season, the culture and energy of this year’s squad seem to be unique. The chemistry between the players and coaches this season has grown stronger as the season goes on and the brotherhood of the team has stayed secure.

Coach John Walters states, “It’s never the same as other seasons. A different group of players. Different team chemistry. The one thing that is 100% similar is these guys really care about each other.”

The relationship between the players on and off the field is a major contributing factor to the Rams’ strong regular season. The return of the traditional full in-person model and the return of all students in the classroom has allowed the players and coaches to create a stronger bond.

“[In-person learning] has had a huge impact. Being in school every day allows coaches and players to interact all day long. Having a locker room to change in vs. in the parking lot allows guys to build relationships on and off the field,” said Walters.

Small talks in the hallways, conversations in the locker room, and the time the players take out of their day to interact with each other have allowed them to create a special bond.

“We’ve had time to bond. Without team bonding you will not have success, so that’s how we’ve been winning,” said Buffkin.

Another important reason why the Rams have had a successful regular season is the players on the roster.

According to Walters, “we honestly have a very great group of guys. But it all starts with our captains: Tyrese Buffkin, Dimitri Hritz, Matt Schager, [and] Raul Garcia.”

By demonstrating good leadership qualities, the team captains have led by example and have allowed the Rams to create something special, said Walters.

“Those guys have led from the start until now,” Walters continued. “They set the pace in practice, games, meetings, and what is expected. Good teams are led by their members and it all starts with our captains.”

So what makes this squad special? According to Walters, “Our play as a team. We are very selfless and numerous players have had standout games and seasons thus far. Our guys care about each other, the team, and our success. That there is a recipe for success,” said Walters.

Although the players that are in the starting lineups are often those who are appreciated and praised for the teams’ success, there are many unsung heroes on the team that has led the Rams to have an impressive winning season. With a strong coaching staff and dedicated supporters, the Rams have been able to compete with some of the best teams in the conference.

“We have a team full of them. Football isn’t always about the 22 or more starters. It’s about our prep teams and special teams. We have just as many unsung heroes as we have heroes,” stated Walters.

As the regular season comes to an end, the Rams look to make a run in the playoffs and maintain their positive record and rank up in the conference. The Rams had a tough matchup against the very strong Glenbard South and will end their regular season playing Fenton, a struggling team.

With the strong culture, the leadership of their captains, and an explosive squad, the Rams look to impress the state and compete against the best football teams in the area during playoffs. GO RAMS!