A Review of Riot Fest 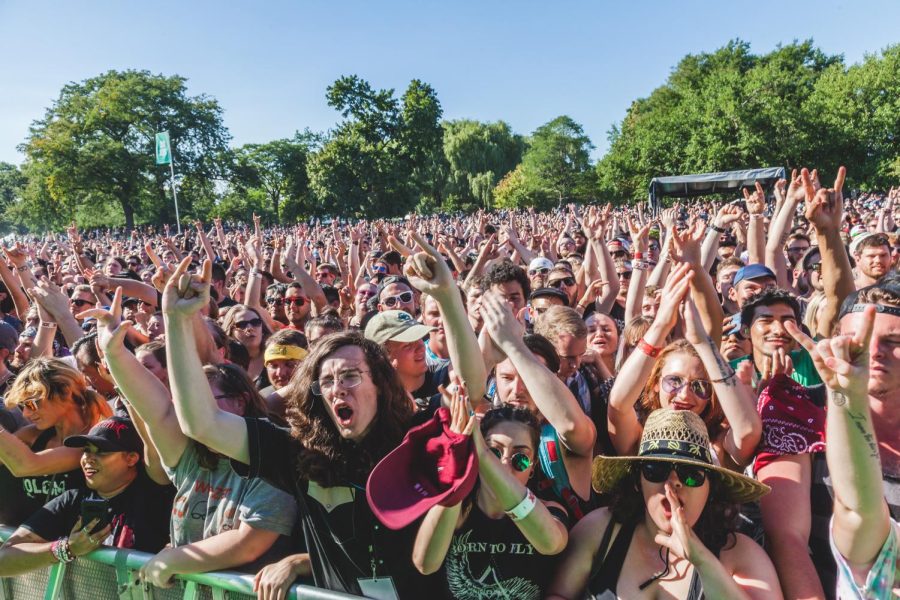 Sun beating down, little bits of shade, concessions and riots. Starting on September 16, Riot Fest started it’s weekend-long festival in Douglass Park. The show occupied the entirety of the park’s area, fitted out with five different stages ranging in size from small to large, a carnival, and plenty of places to get concessions. The festival was incredibly well done, and made for an amazing experience.

The vast majority of the fest was well done with only a few small complaints, and that’s saying something. With nearly the entire population getting in through an entrance on the north side, each line was fitted with a person to stop concert-goers for COVID-19 vaccination cards and/or negative COVID tests, ticket checkers, and metal detectors. Once through that process, attendees were greeted with a place to grab something cold to drink. Smooth entrance, very quick, easy, and as efficient as could be.

Now let’s talk about the merchandise and branding. Starting off, the branding did a great job at being self-aware in saying that “RIOT FEST SUCKS!” In reality the festival was very well done and the acts that performed did not,in fact, suck. The logo design was very vibrant and put on display throughout the park.

The merchandise was all created with chaos in mind, featuring well-designed graphic t-shirts displaying a variety of images such as a man with a TV for a head riding a skateboard, a teddy bear, and a jack-in-the-box toy with a devil popping out of it.

The prices were incredibly fair:  $25 for a regular t-shirt, $30 for a t-shirt with the setlist on the back, and around $45 for a hoodie sweatshirt. The cashiers were all super helpful and got everybody what they were looking for as quickly as they could, and the person helping me was even kind enough to offer a discount for my order (which resulted in a tip of course). This aspect of the show was done beautifully, so credit where credit is due.

Now there is no festival without a flaw. A major mistake of the festival was that there were only two places to fill up a water bottle, and both of them were on one side of the park. In a festival environment, where the sun is on you almost at all times and you’re jumping around in a crowd and getting active, water is a must.

Now to address the real meat of the festival:  the acts. The acts performing on stage truly brought some of the best energy to concerts that I have personally ever seen. A fun show for sure was by the group 3OH!3. This sort of comical and self aware group with a few hits over the years just brought the energy that was needed to get people going for a long day of music.

Speaking of energy, the band BLACKSTARKIDS, a young indie pop/rock band fitted with plenty of rap elements into their act, really impressed me with their performance on stage. Special kudos to the guitarist, who had an unmatched style on stage compared to the rest of his bandmates.

While those three kicked off the day, the true hitters came in after. One such act was Mother, Mother, a band I wasn’t incredibly familiar with that my friends love and was the main reason most of them were going. A five man band fitted with 3 vocalists (playing keyboard and guitar respectively), a bassist and a drummer, their set was incredible. Only given a 45 minute timeframe to cram into, they played their biggest hits and some of the new record, but it was nonstop action. Even knowing only one song, they made me a fan through their charismatic stage presence which got everybody moving.

Anthrax knew how to move a crowd. Crowd surfers were being carried to the front and had fun gliding over the masses. The energy from this show was unmatched on a personal level for me and is what carried me through the rest of the day.

Directly following Devo was The Flaming Lips, a psychedelic rock band from Oklahoma that featured many different balloons in various shapes, one being rather inappropriate and the other being so confusing to me that I couldn’t name what it was supposed to represent. Either way, they put on a wonderful show, and leaving early to get in a good spot for the headliner hurt a little but it ended up being worth it.

The headliners were both very impressive in their own right but there was a clear better show of the two. The first that I saw was Machine Gun Kelly, where he went out in his “You should care about me because I’m me” and played his music for his people. The show wasn’t the worst of the day for sure.

Either way, after leaving midway through the MGK set for the Slipknot set, it was clear to me personally that Slipknot had a much better show. The set was made to look like a haunted building, with some members of the band jumping up and down the elevated levels and getting the crowd to go absolutely insane. After they closed out the night, leaving the park was super simple and everybody got out safely.

Being only an hour away from your house at the most, taking a visit to the south side of the city for this festival is more worth it than you think it would be. Good people, good music, good food, all in one spot. I’d give it a solid 9.5/10.