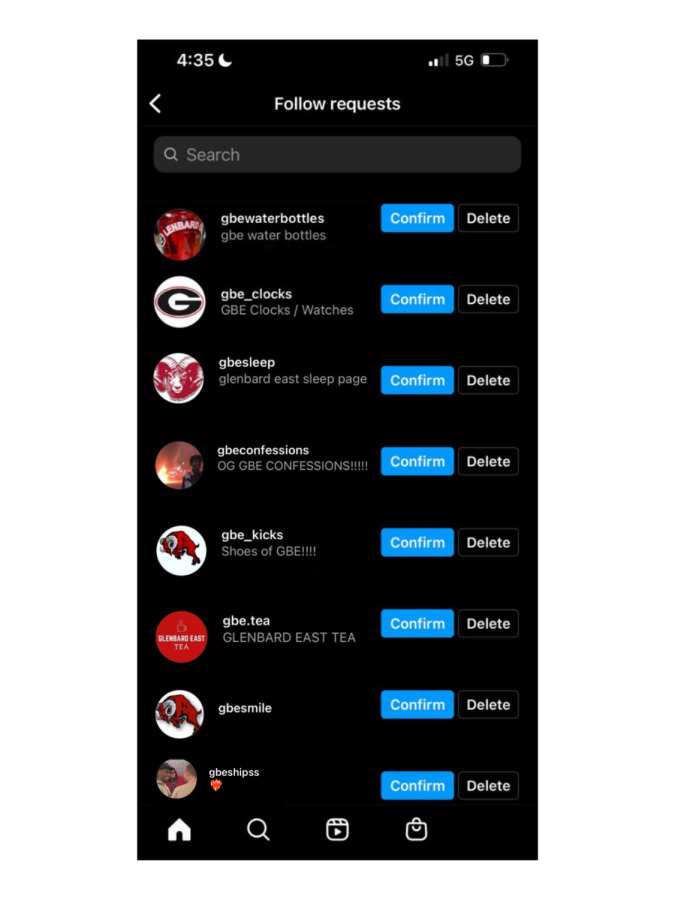 Nervously, I open my Instagram app. Right at the top of my feed is a photo of me wrapped up in a blanket, snoozing on the fieldhouse floor. The worst part: hundreds of my fellow peers have access to that picture.

Photos of my pre-cheer practice naps were posted four more times after that, making me a five-time feature of Instagram page gbesleep. Luckily, I wasn’t the only one who was caught mid slumber. Hundreds of Glenbard East students experienced the exact same thing in the weeks leading up to Winter Break.

Within a week last December, over twenty new accounts flooded the feed of Glenbard East students such as gbewaterbottles or gbe_kicks, each with their own purpose. These Instagram pages cover a wide range of Glenbard East activities and life, from anonymous confessions to simply just the time on the clocks.

They were all the buzz, too. The most popular accounts have amassed hundreds of followers such as Instagram user “gbesleep” with around 900 followers, which documents Glenbard East students sleeping in class This was one of the original accounts created that begins with the letters “gbe”, starting back before Thanksgiving break. However, it didn’t begin to blow up until the week of November 29th when the overwhelming influx of GBE Instagram pages onto the social media site began to feed into each other’s popularity.

These accounts have become a part of the Glenbard East community with students actively sending in content to be posted. Gbesleep has around 500 posts, all of submissions sent in by students. In an Instagram direct message to the page itself, the anonymous leader of gbesleep said that at the account’s peak, they sometimes got “over 50 submissions by the end of the school day.”

Just because a page starts with GBE does not give it guaranteed popularity. Multiple pages such as gbehairs, gbe_clocks and gbe.shoes all have under 100 followers and less than 20 submissions posted. Due to the swarm of new Instagram users, it seems the majority of GBE accounts fail to reach a high status for simply getting lost in the crowd. Nonetheless, even the unpopular accounts are still well-known, stirring up at least a few conversations among the student population.

Junior Stefania Slamkova said the pages have lost their hype.

“They were funny at first but got old real quick” she said.

While a few of the more popular accounts manage to maintain some fans, some students have asserted that the bulk of GBE Instagrams were unsuccessful in creating a positive, memorable presence.

Delicia Lopez voiced “Only the sleep and posture ones are funny. All the others are annoying and pointless.”

But there is also a growing anxiety among the student population for fear of being featured while doing something embarrassing.

Sophomore Alexa Wojcik said, “It feels like you need to be dressed to impress 24/7 and like a camera is always watching you. If you even just don’t sit down right, your photo will be posted.”

Wojcik is referring to the Instagram page “gbeposture”, which posts photos of students in laughable yet awkward poses.

However, some students don’t mind the mass of new Instagram users. Joey Rosenthal said “I gained a ton more Instagram followers because of them so they don’t bother me.”

Although these accounts may appear insignificant, they may violate rules in the student handbook.  For example, the handbook states “students are prohibited from publishing or transmitting private information including photographic video and audio depictions of others without authorization.”

In an interview, Alexandria Taylor, the Assistant Principal of Student Services, said the school keeps a close eye on any social media presence associated with the school. The school resource officer and the Deans’ Office keep a list of any known social media accounts that are connected to GBE and monitor them “almost daily”.

In addition to those who create accounts, any student caught reposting a photo or sharing a site using GBE affiliations can also be held accountable, even if they are just a secondary student. Consequences are decided based on both the severity of the content posted and the level of involvement of the student.

Most of these Instagram accounts are a result of students who are bored and looking to amuse themselves; however, Taylor said they “do not promote a learning environment,” and they should not continue.

Although there are still submissions posted this semester, they are not daily, and it is very few in comparison to the peak of the Instagram accounts back in December. It appears that their popularity was just another passing trend amongst Glenbard East students that will quickly be forgotten with the rise of another new craze.