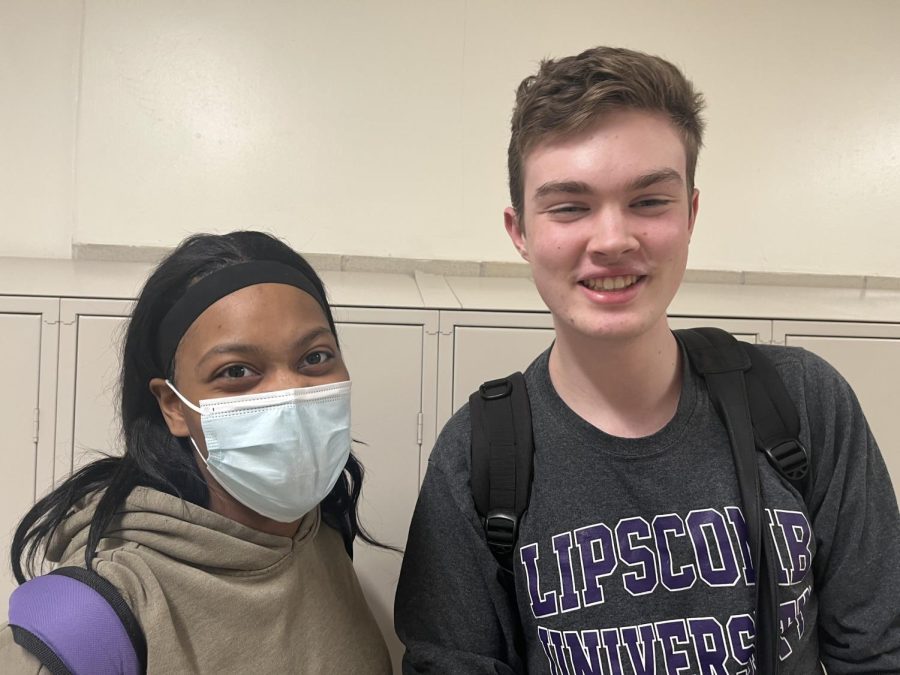 Saniyah page choosing to wear a mask while Patrick Barry is not.

For the first time in almost two years, students and staff will see each other’s faces without masks. Glenbard has made face coverings optional for everyone. Some people praise this change while others feel more uncomfortable now than ever.

In a district wide email sent out on February 17 David Larson stated. “Given the ongoing inconsistencies, confusion and delays regarding clear direction, we are moving forward with a mask optional approach for all students and staff, effective Tuesday, Feb. 22.”

In recent weeks there has been both unrest and confusion about the mask mandate in many communities across the state.

After parents from around 150 school districts filed a lawsuit against the mandate, Judge Raylene Grischow issued a temporary restraining order on it in early February. At that point different school districts reacted differently to the ruling. In particular, Glenbard was not one of the plaintiffs listed in the case and Pritzker has continued with the mandate.

After the mandate was changed, the East administration was surprised by it, according to Alexandria Taylor, the assistant principal of student services.

“We are eager to get to a place where this next step is finally happening. I didn’t know if I would see it this school year, and the fact that we are already there is exciting,” said Taylor. “We all were surprised because for the longest time guidance from IDPH and CDC was strictly adhered to. Legally for some recent legal changes to have been made that support the lifting we were not expecting it.”

Mask-wearing has been a controversial issue since the start of the mandate, and the ruling gave it more ammunition to a movement of community members who disagreed with it. This led to protestors gathering on Main street in recent weeks. They were holding American flags and signs reading “Due process for all” and “Free choice on masks for HS students too”. The song “We’re not gonna take it” by Twisted Sister was blasting.

Monika Moro, whose son is a junior at East, participated in the protest.

“We would like to ask humbly and politely for the school district to follow the restraining order issued in the state of Illinois which restricts the [mask] mandate of governor Pritsker. We would like to have the mask as a free choice,” said Moro.

In response to the district maintaining the mandate Moro said that she sent an email to Larson on Sunday Feb 13 threatening to sue 87 if they did not make masks optional.

When asked if the protestors and/or their threats of a lawsuit affected the decision of the mandate, Larson said no.

There are still many students who do not feel comfortable with others being maskless. Alana Acuna, a senior at East, has been very vocal about her pro mask stance.

“I feel threatened by the mandate being taken away because I really just want a normal prom and graduation because most of my highschool experience has been ruined by covid,” she Acuna. “I am extremely anxious to go back to school. I feel like cases just went down and they’re going to go up again, pushing us into e-learning.”

Jillian Gorvet, a freshman, said that she will still wear her mask at school, but feels neutral about the decision.

“I think only time will tell if it was a good choice or not,” she said. “A good chunk of people don’t wear them properly right now anyways, so I think rather than being uncomfortable it will be just weird to see peoples’ faces.”

While teachers do have the choice to not wear a mask, some like Jennifer OConner, who teaches English, are planning on continuing to wear one to make their students feel more comfortable.

“I plan on wearing a mask in my classroom as long as I have students who are wearing masks,” said OConner.

The two sides both have strong opinions on this issue, some taking to social media to express their feelings.

“I have been posting about wearing masks a lot on social media as well as talking about it in class. I think that in times where cases are this high there shouldn’t be people who don’t believe in science,” said Acuna.

There were satirical posts on Snapchat including one picture going around saying “Unpant our kids” which mocks the coalition of parents who believe that kids should not wear masks. 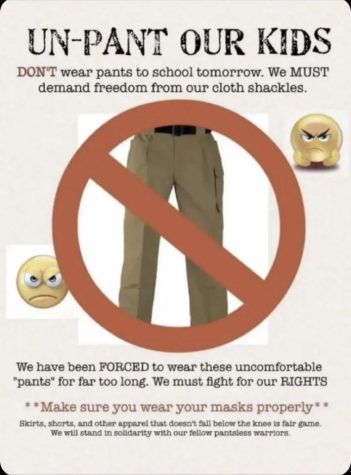 The decision of being mask optional has been praised on Instagram by the account of @barstooleastrams which has over 1000 followers. On Thursday they posted a famous picture of Michael Jordan and Scottie Pippen holding three NBA championship trophies.

But instead of Pippens face, it is Peg Mannion’s. The three trophies read “Snow day Feb 2” “Snow day Feb 17” and “Mask mandate over”. The caption reads “The best three peat since the 98 bulls! #peg”.

Moro also said she believes that students were being mistreated for choosing not to wear a mask.

“They were put in different rooms and deprived of their access to full education. They have no interaction with their peers and teachers.”

In mid February there were students who protested the mandate by refusing to wear a mask when in the building. They were escorted to the dean’s office, then put in a classroom next to the cafeteria alone for the whole day. They were marked excused from their classes.

According to Taylor, “The students wanted to exercise their right in an environment that was safe and protected. For our students who still chose to wear [a mask], we wanted to make sure that we protected them. As a school with the fast changing legal landscape it put us in a difficult position because we are responding to things that we had very little control over.”