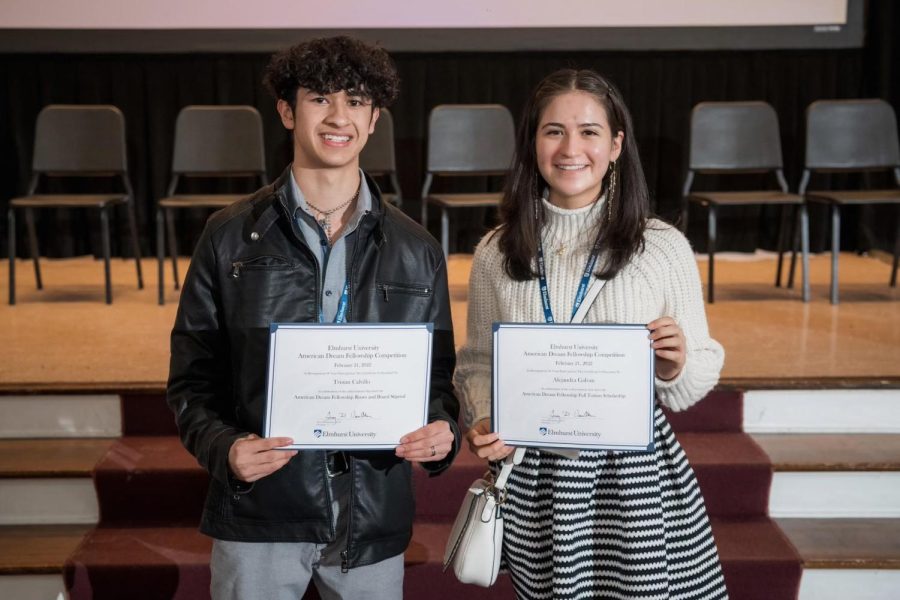 When Glenbard East senior Alejandra Galvan found out she had won Elmhurst University’s American Dream Fellowship, she couldn’t believe it. Despite having worked hard on her video submission, she had gone into the competition preparing for what she was fairly certain was going to be a loss. But there she was, sitting with her fellow applicants in Hammerschmidt Memorial Chapel, with her name being announced as the first place winner. When she heard it, she says, she cried.

Elmhurst University created the American Dream Fellowship Competition with the intention of supporting first-generation college students. The prompt (“How will Elmhurst University help you achieve your American Dream?”) was released in December and three-minute video essays were due in mid-January. Later, on February 21, applicants were invited to the university to participate in a group project, hear from a panel of first-generation students, and attend the awards ceremony.

Galvan’s video told the story of her parents’ sacrifices to ensure their children’s success, as well as her hopes for the future at Elmhurst. Her parents immigrated to the U.S. in search of work in the 1990s, her father from San Luis Potosí in 1991 and her mother from Jalisco in 1997. Both sent money home to support family members back in Mexico. Neither of them had earned a bachelor’s degree, but, as Galvan says, “higher education has always been a priority for my family.”

Galvan has both taken and excelled in numerous honors and AP courses during her time at East. Outside of the classroom, she is heavily involved in the school’s orchestra department, serving as concertmaster of both Concert Orchestra and the extracurricular group Eastrings, and is president of French Club.

The journey to her recent accolades hasn’t been easy, however. She recalls difficulties with filling out many parts of the Common Application, especially the list of activities and personal statement. Friends and her counselor helped along the way, giving advice and helping proofread.

Galvan was also supported during the application process by CREO, an organization dedicated to helping first-generation Hispanic students along the path to higher education. It was on one of the college visits organized by CREO that she realized that she wanted to attend Elmhurst University: a school that she liked for its nonmajor orchestra, proximity to her home, strong psychology program, diverse community, and numerous programs dedicated to supporting first-generation students. A drawback, however, was the cost.

“The tuition was high, but I really wanted to go to Elmhurst,” she says. One benefit of the American Dream Fellowship, therefore, was that just submitting an application would earn her $1000. But her success wouldn’t stop there: she went on to win first place in the competition, which landed her the grand prize of free tuition for all four years.

In the fall, Galvan plans on majoring in Psychology and minoring in Spanish and French at Elmhurst. She also plans on joining Philharmonic Orchestra and finding a job on campus.

And while her parents’ American Dream has shaped her and inspired her award-winning video essay, Galvan hopes to transfer its impact to her younger cousins, whom she hopes will also feel encouraged to attend college. Another goal is to stay involved with CREO, the community organization that helped her in her college journey. “I hope to be a spokesperson and volunteer for CREO,” she says, “to offer help to younger students in the way that they have helped me.”